Features of the Opossum North America

The opossum has sharp teeth like a cat, but the primary distinguishing feature of an opossum is its bare, rat-like tail.

Some people consider the opossum to be an ugly creature, when in fact the opossum is wonderfully helpful to humans. It eats approximately 5,000 ticks a season and many other vermin. It keeps gardens pest free. It is almost impossible for an opossum to have rabies. They do however carry a virus that can be lethal to horses and they can kill small chickens. So horse and chicken owners should take care. 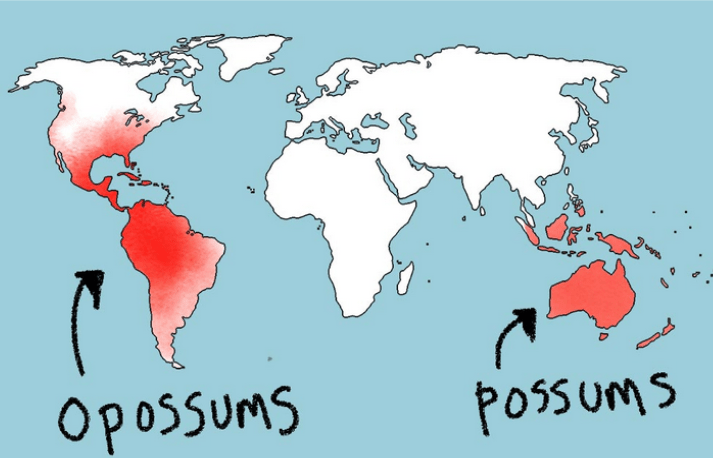 The Australian possum, also called the common brushtail possum, looks a lot like a large Chinchilla. 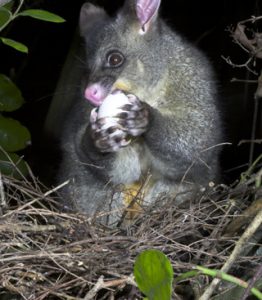 First, its coloration ranges from a chinchilla gray to a fox silver-gray and gold, and even black. The ears of a possum are larger than that of the Virginia opossum, and their fur is softer and much more bushy. The key differentiator, however, is the Australian possum has a bushy tail covered in fur (hence the name).

Both animals are marsupials, and their snouts, feet, and eyes are similar. They both have similar diets, essentially being opportunistic omnivores. Opossums and possums both eat, to varying degrees, meat and other animal matter such as insects, birds’ eggs, and small vertebrates, leaves, flowers, shoots, fruits, and seeds.

The Brushtail Possum is a native of Australia. It was introduced to New Zealand in the mid 1800’s. There is no natural predator for the Possum so their numbers grow. The New Zealand government has declared the Possum a certified and dangerous pest. Possums can eat half a pound (300 grams) of foliage a day and prey on the eggs and chicks of endangered birds like the Kokako, Kereru, and Kiwi, New Zealand’s iconic national bird.

“They are gobbling through this country as if it was made of ice cream,” said Herb Christophers, spokesperson for the New Zealand Department of Conservation (DOC) in Wellington. 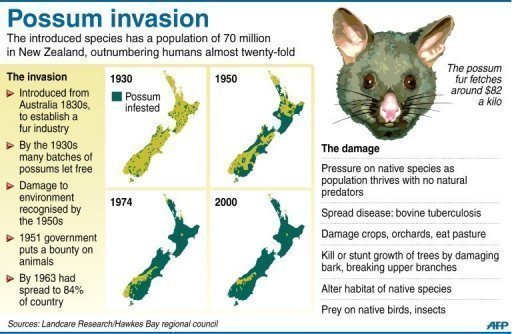